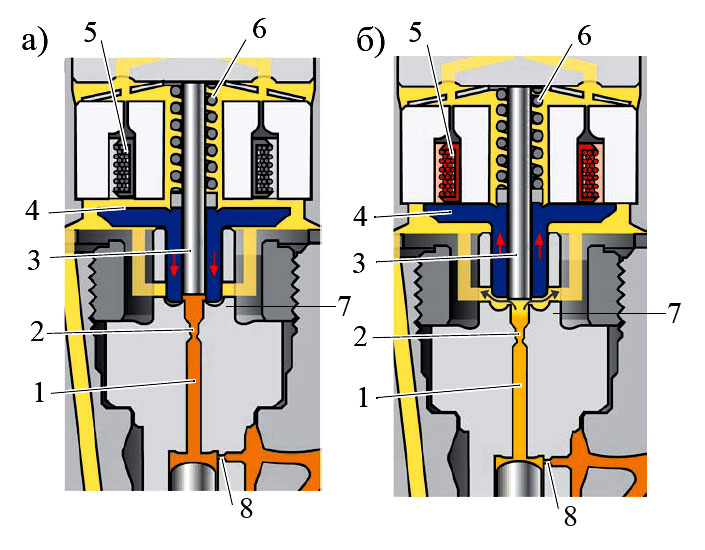 The principle of operation of an injector of this type is as follows; If there is no current supply to the coil of the electromagnetic coil (5), the solenoid valve (4) is pressed by the valve spring to the seat (7) and closes the channel between the regulating cavity of the valve and the return line (Fig. 1, a). The pressure in the control cavity (1) of the valve is equal to the pressure in the ramp (in the high pressure circuit). Since the cross-sectional area of the pressure rod is smaller than the cross-sectional area of the injector's needle, the needle is pressed into the nozzle seat, the nozzle is closed.

For injection; The engine control unit supplies voltage to the coil of the electromagnetic coil. As soon as the force created by the electromagnet exceeds the locking force of the spring, the armature of the solenoid valve moves upward and opens the drain choke (Fig. 1, b). Fuel from the valve regulating cavity through the opened drain choke flows into the return fuel line. The fuel pressure in the valve regulating cavity is reduced. The choke diverter (2) prevents rapid pressure equalization between the high-pressure circuit of the engine and the regulating cavity of the valve. The needle of the nebulizer under high pressure of fuel is lifted and the injection begins.

In this electrohydraulic nozzle design, unlike the ball valve nozzle, the anchor with the fixed finger, closing, does not have to overcome the high pressure force, as a result, it requires less force to seal the high pressure channel. A smaller closing force of the valve with a fixed armature arm makes it possible to perform a three times larger valve opening section than a ball valve. Thus, to ensure the same amount of fuel outflow from the valve control cavity; requires a smaller working stroke. A smaller working stroke makes it possible to perform a very short valve switching time and thus, several injection cycles per stroke of the engine can be achieved, which in terms of the speed of action brings such a nozzle closer to piezoelectric, simply more expensive.